The Creffield Area Residents’ Association, CARA, was set up in 1975 by a group of residents living in Creffield Road, and the roads leading off Creffield Road. Its formation had been prompted by concern about a hostel for ex-prisoners in the former Silverdale girls’ school, which stood derelict.

Founder members felt the need for an organisation which would keep a watching brief on building developments in the neighbourhood, so that the character of an Edwardian garden suburb was maintained. It also wanted to strengthen the feeling of community spirit amongst people living in the area, who frequently commuted some distance to work.

Later there were other worries about the neighbourhood, and in the 1980s its Chairman at the time, Anthony Rowland, said

‘We want our area to be made into a conservation area because some building alterations are adversely affecting it. Unless you can make alterations to a uniform standard it is better to keep things as they are’.

The group had the support of the local MP at the time, Sir George Young, who promised to lobby the Environment Secretary, then Michael Heseltine. Young declared,

‘That particular part of the borough was built and planned as one unit and it still retains the coherence of a village. If there are many more conversions or alterations the nature of the area will be changed’. 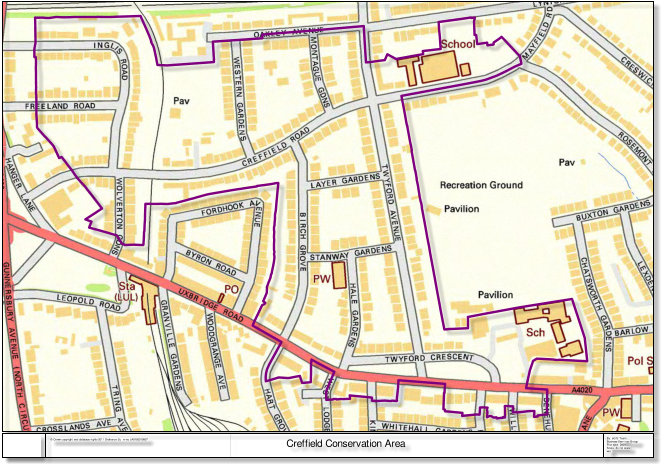 The area covered by CARA is slightly larger than that of the Conservation Area and extends to include residential areas to the east of the Twyford Avenue Sports Ground as shown on this second map.

The governance and financial management of CARA is undertaken by an Executive Committee composed of volunteers who receive no payment for their services. There is an Annual General Meeting held in May each year, to which all members are invited. Annual General Meeting Minutes and Reports of meetings of the Executive Committee are posted on the Members’ area of the website.CARA plans four social events a year in order that local residents might meet each other, and that new residents might feel part of the community of the area.

The purposes of CARA were written to reflect these aspirations, and to set down rules for how CARA operates.  CARA is one of Ealing Council’s consultation partners, and is invited to comment on all planning applications in the area. CARA is also represented on a number of Council-run committees, for example, the South Acton Ward Forum, and the South Acton Police Panel, and the Creffield Conservation Committee. CARA has also had representation on the Save Ealing Centre lobby, and the Night Time Economy Committee (established to bring agencies operating at night together – such as police and local ambulance services), and is developing Neighbourhood Watch schemes to cover CARA streets, linked with the Safer Neighbourhoods Team of the Metropolitan Police. CARA is also in close touch with the fly-tipping and graffiti section of the Council.